The Guys Who Spied For China

Minstrel's Alley has just released The Guys Who Spied For China, a roman a clef, exposing Chinese Espionage Networks operating throughout the United States during the eighties and nineties. It is the quirky story of how two disparate men uncovered an elaborate spy operation that had functioned on American soil for nearly four decades. Through fate and serendipity, Sex, Drugs and Rock and Roll, meets Johnny G Man, a vaunted scientist and the ultimate Cold Warrior. What they helped unmask was a network of home grown spies in California and throughout the United States. As a result, newspapers ran relentless headlines depicting Chinese Espionage practices in the United States.

The year 1985 was pronounced by the news media as "The Year of the Spy." "This is a new twist on the spy drama. While providing details of events that were often swept under the rug, this very personal and often darkly humorous tale captures what it feels like to be suddenly thrust into the shadowy world of espionage. You get to feel what it's like to be there. The Guys Who Spied for China is set largely in California, in the Santa Monica Mountain Range, just above Beverly Hills. What's remarkable is that most of this story is true. is a newly completed manuscript, a fictional account of my very real experiences working for a gentleman in the upper echelons of government who as responsible for uncovering many of the key Chinese Espionage Networks Operating in the United States.

The Guys Who Spied For China is relevant to this morning's headlines, as evidenced by a recent Chinese Spy Scandal, featuring accused double agent, Katrina Leung, and FBI agent James J. Smith. And this is but one of the ongoing or upcoming episodes that grace our newspapers, reminding us that Chinese espionage is far from an old story but rather a continuing serial, starring new and repeated characters. China this year will spend four times the budget for upgrading its Armed Services than it did last year.

But The Guys Who Spied For China is a lot more than another chronicle. The book is timeless in its depiction of an intimate relationship among diverse individuals-- me and the man known in the book as Noah Brown--who came together through fate and circumstance. When I first started writing this book, I was faced with the proposition of writing yet one more potboiler that was based in the usual fantasies, or depicting events pretty much as they came down and showing them through the three major characters and their complex relationships. I chose the road less traveled, believing the quirkier texture and the fateful reality would best capture these events as they were experienced by everyone involved. Ultimately, I feel it will retain a much greater shelf life than one more depiction of Skip and Chipper saving the world yet again from total destruction.

To describe this book in a sentence, it is as if Carlos Castaneda met the Don Juan of the Spy World and went off on the E-ticket ride. In another sentence--It's as if an "everyman" was drafted into this dark world and given a front row seat. I was that everyman.

The Guys Who Spied For China 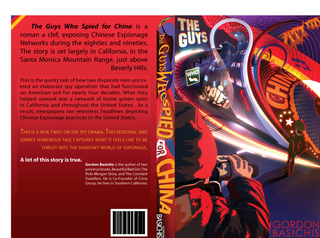 “…We should thoroughly learn the written and spoken languages of all countries so as to translate Western books and newspapers, in order to know what other countries are doing all around us, and also to train men of ability as diplomats. We should send people to travel to all countries in order to enlarge their points of view and enrich their store of information, to observe the strengths and weaknesses, the rise and fall of other countries; to adopt all the good points of other nations and to avoid the bad points from the start. As a result there will be none of the ships and weapons of any nation, which we shall not
be able to make, and none of the machines or implements which we shall not be all to improve.”
---T’an Ssu-T’uang, 1897

AND LATER ON UP THE ROAD...

Noah drove his Corvette up Beverly Glen and along Mulholland Drive, until he found a vacant parking spot overlooking the city. Down below, the lights of the city shimmered before us, aglow in the allure and promise of a different world and better times. Small wonder this part of Mulholland Drive had served for years as lover’s lane. Only now, with all the wanton construction, the remaining vacant spaces were rapidly disappearing. Instead of teenagers parked in their cars, looking for romance, estate size monstrosities had taken their place. No more love on lover’s lane. Just excess. And Noah and I.
“You said with the Chinese woman he sat with his head bowed and didn’t say a word?”
“Pretty unsettling. Especially with all the others in the room.”
“Do you believe Louie’s stories? About killing people?”
I nodded. “At first I thought he was full of shit, but I had a serious change of mind. Something about him, and the way he tells the same stories over and over. They never vary the way they would if all of it was fantasy.”
Noah paused, lighting a cigarette. As a show of courtesy he cracked his window, exhaling a long, steady stream into the cool night air. The look on his face made me believe he had reached a major decision. He had.
“I’ve been keeping a file on Louie since the day he first moved into that house. I tracked him and watched him, observed his friends and, like he said, I bugged his house and the telephone lines.”
Noah squinted at me, openly gauging my reaction. Satisfied I wasn’t preparing to leap from the car, he went on.
“The reason I didn’t go to the party? I had met with my peers, and they decided I better stay away. We weren’t really sure what the gun nuts had in mind; only that the party was a setup for someone to meet me. Now it is obvious. Louie had promised to deliver me to the Chinese woman, so she could have a crack at persuading me to roll over and work for their side.”
I felt the unmistakable chill of truth running up my spine.
“Like I said, I’ve been tracking this for years now. From time to time I had other federal agents come to the house and establish surveillance. They’d take a look at Louie and friends for a couple of days and then pass them off as fantasy dwellers. Harmless gun nuts.”
Noah laughed in recollection and took another drag on his cigarette. For sure as hell, I wasn’t going anywhere. He could take all the time he wanted.
“My own credibility was being questioned. One time they had me in for psychological tests. They thought I was maybe losing it over Louie.”
“C’mon.”
“The night of the party we had surveillance all over the house. Somehow we missed the Chinese woman. I don’t know how she got in or how she got out without being detected. But you saw her, that’s the important thing.”
“She was hard to miss.”
“She was the piece we’ve been looking for. I always suspected Louie was up to something, but I couldn’t tell whom he was tied in with. That woman you saw? A dollar to a soggy doughnut, she’s an agent for the People’s Republic of China. And that’s the giveaway. She was giving him hell because Louie failed to get me to come to the party. He had failed in his mission, and she was all pissed off.”
“So what are you saying?” I asked.
“Louie is a Chinese mole. He’s probably been active for many years.”
He took a final drag on his cigarette and flicked it out the window. Fire hazards were the least of his concerns.
“Louie. Lindermann. The others. Most are part of a network. How big it is, it’s hard to say. But we’ll find out. That I can promise you.”
“Well,” I said. “Talk about a fucking punchline. There’s a reason you’re telling me all this.”
Noah smiled. “Let’s face it, you love this kind of thing. You’ve been flirting with it in one way or another your entire life.
“You’re smart, so you got away with things. Things that maybe you shouldn’t have been doing. But now it’s time to contribute. It’s time you did something for your country, don’t you think? You know these people almost as well as I do. And you know they’re dangerous. They’re traitors.”
“You want me to stay close to Louie? Is that it?”
“Not quite. There are things I could teach you. Things I’ll guarantee you’ll never learn from anyone else. Let’s face it; I’m nearly crippled. I need a good pair of legs. I could use your help, if you are willing to give it.”
“And if not?”
His scowl belied his answer. “Then that’s up to you.”
I sighed and looked out over Los Angeles. I remembered all the movies I’d watched as a kid that were filmed not far from this very same spot. I remembered, as a young man, yearning to come to California and take in this view. I remembered driving up alone, staring out at the lights, the grids, the airplanes flashing overhead, and relishing the aura of promise offered by the city below. I loved it up there. It was a holy place. An open temple. It was a fitting site for this defining moment. If I were embarking on the E-ticket ride into the shadow world of spying and intrigue, then it was appropriate that this would be my point of departure.