MIDDLEBROWS AT THE SWITCHES, AND OTHER TRAGEDIES OF THE TWENTY FIRST CENTURY.

Thanks to a variety of factors, media consolidation notwithstanding, it is increasingly difficult to publish books other than genre, generic or those that are written to fortify the pre-conceived socio-political notions of those in publishing and their more middle class friends. Such a system has created a near religious belief in movie-like heroics where even the most complex situations are resolved within 120 minutes or three hundred pages, whichever comes first.

Of course we know it's all pretty inane and stupid; our guilty pleasures popping up to embarrass us like erstwhile relations at a rain soaked funeral for a hated uncle. But slowly and surely, we have grown comfortable with the reassurances of the idiot fable and have found collective sanctuary in our guilty pleasures. We have come to believe that fantasy is reality and reality is fantasy. We have no patience. We yearn for the unattainable. Instead of grit and candor that promotes understanding, we are subjected to various dialects of jargonese. And then, worst of sins, we have lost the sense of irony that would otherwise enable us to at least laugh at the predicament we have created.

I offer no solutions really. Somewhat, in the tradition of the late great George Plimpton, I immerse myself in real events. I like to say it's all deliberate, but much is by accident as, like most, I am a result of fate and circumstance. Unlike the inimitable Plimpton I often use fiction to try to tell what it feels like to undergo bizarre, romantic and even dangerous experiences. I attempt to evoke the sights and sounds, the soul of what it is to venture in strange worlds. I write of worlds fraught with the romantic vagaries of life, its triumph and consequence, and I perceive it with humor. Rather than inflate myself with the self-importance that seems so prevalent these days, even the more serious subjects do not escape my lighter senses.

I hope you enjoy what I write, because I write it for you--the reader. And the non-reader, the man or woman who would gladly read, if they could only find something more relevant, more personal.

I hope my stories are a brief respite from our fantasy of everyday life. 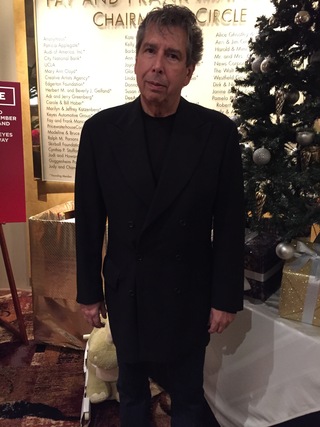 I have wanted to be a writer since I could first remember. Knowing nothing about the "industry," I sold my first book when I was twenty-four years old, and then published another at twenty-seven. But then life intervened in what was otherwise an erratic and circular career and took me on journeys that I couldn't have imagined as a former street kid in possession of not much more than a Smith Corona and an attitude.

There was my friendship with Vicki Morgan, long time mistress to Alfred Bloomingdale, scion of American politics and industry and member of Ronald Reagan's "kitchen cabinet." That led to priceless insights into both the deepest nature of greed, sex scandal and romance. Not to mention government corruption, and finally, murder. The original sex scandal led to my own scandal and the ensuing embarrassment and personal humiliation, Finally came the defrocking of my youthful sense of immortality. It also taught me about the double edged sword in possessing information. Particularly the right information on the wrong people.

It was a valuable lesson, or really, a series of valuable lessons that culminated in my book, BEAUTIFUL BAD GIRL, THE VICKI MORGAN STORY. It is available in both Print and eBook format. If Vicki were a male instead of female, she would have been categorized as a sexual adventurer instead of a Hollywood slut.

My latest novel is THE CUBAN QUARTET, an international romantic mystery, seeded on the rumors and legends surrounding missing mob money when Castro marched into Havana. I worked on this novel on and off for a fair number of years. Now with Cuba so prominent in the news, I figured it was time to finally complete it. It was a lot of fun writing this book.

In my novel THE CONSTANT TRAVELLERS, a humorous new age Western that many consider ahead of its time, I maintain in this somewhat magical realisml book that there are no accidents. Events may seem random, but sooner or later one will see the connection. I saw the connection--my exposure to sexual and political scandal and murder, delivered me into the world of espionage.

I have no doubt it was the Vicki Morgan book that led me to a man I depict as Noah Brown, literally a rocket scientist, long time upper level intelligence operative, and adviser to eleven presidential administrations. Like most accidents that are fated to happen, Noah and I were destined for major adventure. In the mid and late eighties I served as his personal aide, while Noah Brown uncovered much of the Chinese Espionage Networks operating in California and throughout the United States. The confidential task force that Brown was part of was responsible for the discovery of Chinese espionage tactics and methodology, as well as its origins and operations. From this project, the public became aware of the threat from Chinese Spy Operations. Valuable information was provided to different intelligence commissions, and the news agencies had a field day.

As with the Vicki Morgan book, it was my turn again to participate in real events and see how they were translated to the media, who in turn interpreted these events in the way it best saw fit. Despite inaccurate assessments and misinterpretations, I dare guess this process of translating reality into palpable stories has been with us throughout the course of civilization. Some know it as history.

The Guys Who Spied for China is written as a roman a clef, based on actual experiences. People told me they were shocked how rampant was the frequency of Chinese Espionage. The only thing surprising to me is how surprised others were.

The Guys Who Spied for China is a timeless story about two people from very diverse backgrounds coming together for a common purpose. It is a story about a relationship, and how understanding can be honestly achieved regardless of initial disparity. It is also timeless, because the beat with China goes on. China steals American weaponry and technology. China spends four times last year's budget to upgrade its Armed Forces, and poses and even greater threat to American security. All while we dutifully continue to argue over our policy, or lack of policy.

My novel entitled, THE BLOOD ORANGE, is a mix and match of various true events I either experienced over the years and stuff I quite simply made up along the way. More significantly, it incorporates Old Spanish California myths and legends into the heart and theme of the story. Set in present day Los Angeles, this is a modern day take on classic California mystery noir. I really had fun writing this book as the city in which I lived became one of the lead characters in the novel. It's romantic, a mystery, an adventure, funny, and at times it's violent as hell. But what's life without a little danger, eh, ese`?

Once again, I welcome you to my site. I tell you I write out of compulsion, and I write for the love of it. I hope you enjoy my work.